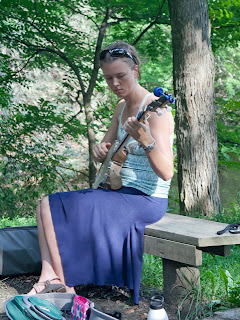 Picture this: a week of old time music and dancing set in the lush rolling mountains of Appalachia, where there's a jam around every corner and everybody knows your name.


Sounds too good to be true, right? I got to experience this state of bliss for the first time in July, when I joined fellow AFTM mem- bers Sharon Isaac, Jeannie DeFriese, Barbara Deane, and Howard Rains for the Old Time Week of the Swannanoa Gathering of Friends.


The Old Time Gathering is part of a four-week summer series of music workshops held at Warren Wilson College, a small liberal arts college just outside of Asheville, NC. For the last twenty summers, like-minded old time enthusiasts have made the pilgrimage from around the world to immerse themselves in the culture and arts of Appalachia.


The week is structured so that there is literally something going on every hour of the day. Students have the option of selecting up to three daily workshops taught by amazing musicians including Dirk Powell, Rayna Gellert, John Herrmann, Paul Brown, and Alice Gerard, just to name a few. The time between these classes is spent at onsite concerts and dining on scrumptious food from the college's organic farm. Once you factor into this timeframe the non-stop jam- ming taking place all over the college campus, you can pretty much forget about sleeping for the week.


Needless to say, my first time at Swannanoa was overwhelmingly positive. From the minute I stepped off the plane, I saw more banjos at the Asheville airport alone than I had ever seen before in one place! The 300 other participants were among some of the nicest people I have ever met, and it was truly inspiring to meet such kindred spirits – all of whom were just as excited to be there as I was - united by a shared passion for music.


While my main reason for attending Swannanoa was to study banjo, I left with a full course in the old time tradition. Spending a week immersed day and night in the tunes had a real impact on my understanding and relationship to the music. I found the real beauty of old time music lies in its down-to-earth nature that never takes itself too seriously. This message really hit home when John Herrmann, banjo player extraordinaire and my teacher for the week, shared with our class the secret to playing old time music. "If all else fails and you don't know the tune," he said, "just play Cotton- Eyed Joe! And then when the song ends, ask yourself how that tune was different from Cotton-Eyed Joe..."


After a week in North Carolina, coming home to Austin was rough. I suffered from bouts of fiddle withdrawal and had to come up with answers every time my well-meaning coworkers asked, "How was band camp?" I've resigned myself to the fact that few things in life will be as fun as Swannanoa. Guess that means I'll have to go to Clifftop next summer, too!
Posted by Austin Friends of Traditional Music at 7:10 AM