Just to clarify, I would like to let everyone know that we have cancelled the AFTM jam sessions at the HOPE Farmer’s Market. It was too much to add another jam to the existing AFTM events, especially on days when we already have a board meeting and jam at El Mercado. It’s always disappointing to have to share the news that a jam is cancelled, even if it smooths out an otherwise too-hectic schedule. But you shouldn’t feel too TOO sad, because I have a list of action items to help pull you out of your funk:

1. Visit the HOPE market anyway! Buy some organic veggies! Get a tamale! (Seriously, get a tamale. They are delicious.) And listen to some of the live music while you are there! You may even see an AFTMer or two on the stage. If you are interested in performing or putting together a music event at the market, please contact Jessie Curry, the music coordinator, at jcurry@hopecampaign.org. To find out more about the market in general, click here.

2. Come to the jams at El Mercado! Since moving to our new location, we have had lots of great jam sessions with large attendance. Stop by from 2:00-5:00 on the second Sunday of every month and have a margarita while you jam out!

3. Come to the jams at Rio Rita’s! Britt has resurrected this jam from near death, and now we have a great session meeting on Tuesday nights at 7:30 or thereabouts. We get a lot of musicians visiting Austin who stop by to join in the music, so come by and play some tunes with some familiar faces and possibly someone new as well!

4. Watch this video of Matt Olwell and Nic Gareiss dancing to the music of Stephanie Coleman and Cleek Schrey.

Marc Airhart's Four Potatoes Podcast  Episode 5 has now been published.  This is Part 2 of the Texas Songcatcher, Howard Rains.

It is a very interesting podcast with some great tunes.  Congratulations again to Marc and Howard.  Check it out.

Posted by Sharon Rose at 5:11 PM No comments:

Marc Airhart's latest episode of his Four Potatoes Podcast features Texas fiddler, Howard Rains.  Howard is a long time member and supporter of the Austin Friends of Traditional Music.  Here is the podcast about his progress in collecting old Texas Fiddle tunes. http://www.fourpotatoes.org/2014/03/texas-songcatcher-pt-1/
Posted by Austin Friends of Traditional Music at 6:14 PM No comments:

The 21st Midwinter Festival was billed as a fundraiser and it did that alright, and a whole lot more.  Re-affirming Austin as a town where music-making is a way of life,  both lovers and practioners of the art came together once again Saturday, February 8th for a full day of learning, listening, playing and dancing at the Dougherty Arts Center on Barton Springs Rd. to benefit the Austin Friends of Traditional Music.  Many thanks to those who gave of their time and skill to make it a success much worth the while.

All the performances were memorable.  Special thanks to Mark Gilston and friends who started off the stage entertainment with a delightful variety of tunes featuring the lap dulcimer.  Bothering almost no one, the Annoying Instrument Orchestra broadened horizons and introduced many to aspects of music they might not until lately have otherwise considered – and making the experience all the more enjoyable for it.  Austin is blessed with truly accomplished musicians.  David Hamburger is certainly one. A gifted guitarist he was joined by Mark Epstein and Kyle Thompson and serious blues ensued right there on the stage. Guitar fanciers really lucked out this year, Peter Keane kindly brought Old Time Country Blues Guitar alive once again up close and personal.  I love old records, but real music only gets played once and the chance to hear it like that is just what memories are made for. The soul-stirring gospel sounds of The Rudiments paired with the impeccable piano joyfulness of T. Jarrod Bonta made a believer out of me.  And if you needed a miracle, all you had to do was wait around for Ayan Hall step-dancing to the Irish flute mastery of Jonathan Milton.  Old-time favorites the Double Eagle Stringband teamed up, set the beat and got more than a few folks dancing where they sat and otherwise.  An etxra-special treat was Silas Lowe, Ben Hodges and friends playing their very special brand of Bluegrass and old-time music as Los Jankies.  I think I'd be safe in saying that they were among the favorites of this year's festival.

It was hard to believe the variety of items that we had for sale at the silent auction! We had so many wonderful donations from people all over the Austin community. DJ and Pat Stamp even had some “wild card” instruments where we weren’t sure just what they were nor how to play them, which led to some fun speculations and experiments. The big challenge of the day was a mandolin donated by Elizabeth Pittman, wearing a tag that said “wall hanging only – not playable.” This instrument quickly became our sword in the stone as musician after musician attempted to get a working tune out of the strings, with Will Webster setting the pace and winning the mandolin to take home as well! But really, would you expect any less at a music festival in Austin?
Much of the business of the AFTM is about encouraging folks to reclaim and play their own music.  Music is a gift across generations, born from tradition, grown in the heart, and given as an act of humanity from one person to another.  Whether in the teeth of competition at a fiddler's contest, trading blues licks in the shade while the Bar-B-Cue smokes, or the passing of a cherished technique from a master to the eager student of any one of the countless instruments and styles the world over, the experience is valuable and to be encouraged for no other reason than that it ought to continue.  We are very grateful for those masters who gave their time and energies this year to the wonderful world of workshops.  Jon Polacheck and a cast of thousands (well maybe not that many) presented a Survey of Old Time Guitar Back-up Styles.  The dancers in the clogging class with Erica Braverman (a special thanks to Will Webster for providing the music!) were surprised when a cameraman from YNN showed up to the workshop, but did not miss a beat! The stalwart Jerry Hagins imbued lovers of the drop-thumb with new delightful tricks and turns for the claw-hammer banjo.  Texas-style and swing fiddle master Mark Seale held forth with knowledge and skill opening the past to those present, demonstrating fiddle tune origins and what became of them here in the Lone Star State.  If you were lucky enough to squeeze into one of the rooms where The Rudiments taught gospel harmonizing or Jeff Robertson brought the Flat-pick Guitar into focus, you know what a great community there is surrounding the Austin Friends of Traditional Music and, like me, I bet you're mighty glad to be part of it.  There is just not sufficient space to recount nor repay all those who contributed to the entertainment, instruction, and good companionship we all enjoyed at this year's Midwinter Festival. Thanks to everyone who contributed and continues to help to keep the AFTM part of what makes Austin the wonderful place that it is.  Here's to the next 40 years!

Posted by Austin Friends of Traditional Music at 2:15 PM No comments:

Too much happened at this year's Austin String Band Festival to truly do the weekend justice with a recap. What can you expect from three solid days of music, singing, dancing, jamming and general no-holds-barred fun? But we are going to try and share some of the highlights of the event with you, so that those who participated can reminisce and those who weren't able to make it out to Camp Ben can share in the memories that we made!

We started our weekend out the right way - a big square dance with some Cajun dancing sandwiched in the middle for good measure! 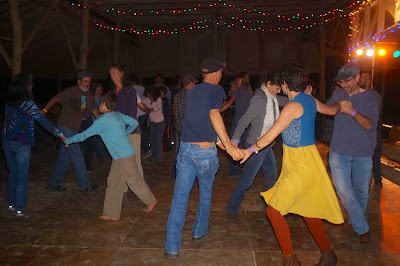 Even though some of us had been jamming into the wee hours, we were ready for workshops on Saturday morning. There were classes to fit everyone's tastes and interests, from country dancing and clawhammer ukelele to Son Jarocho and old-time rags.

(Thank you so much to all the musicians and dancers who were a part of my clogging workshop! Also, Tim W., you are an amazing person for making TWELVE step-a-tunes with your bare hands just for us!) 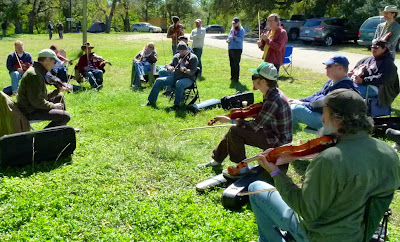 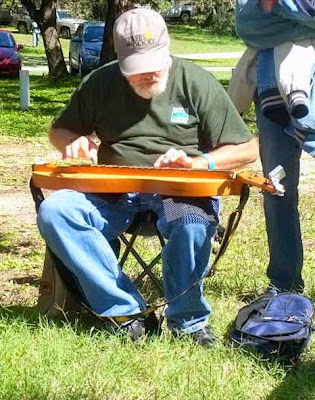 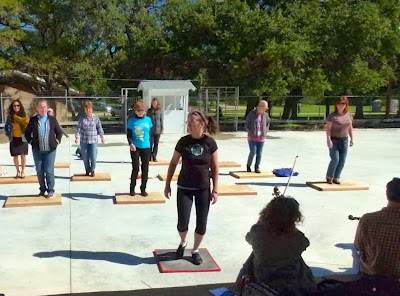 After the workshops, we were ready to hear some music! The afternoon and evening lineup took us from oldtime to country to bluegrass to conjunto and back again. We heard from local favorites like the Carper Family and Spencer and Rains, and special guests like Brad Leftwich and Linda Higginbotham. I think the only sound you could hear during their set (besides the tunes of course!) was the sound of everyone's jaws dropping in amazement. The delicious barbecue on that night's dinner menu kept us fueled as we headed back and forth from the main stage to the mini sets to catch our favorites!

(We got some awesome clogging and flatfooting going during the Sawmill Vagrants set! You guys rocked and rolled!) 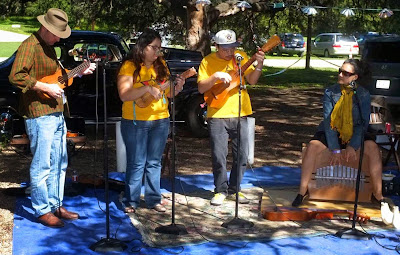 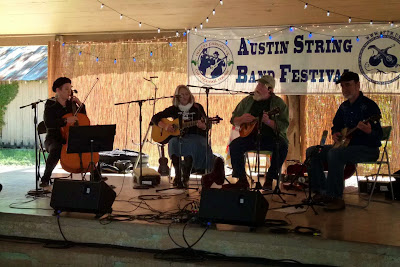 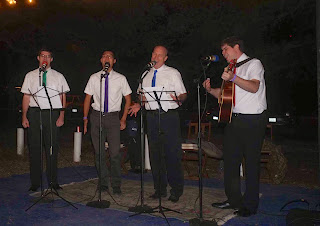 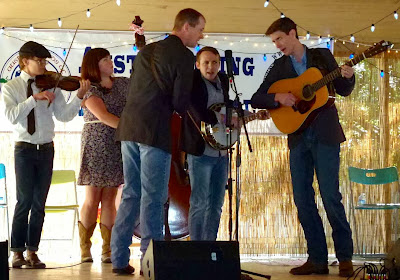 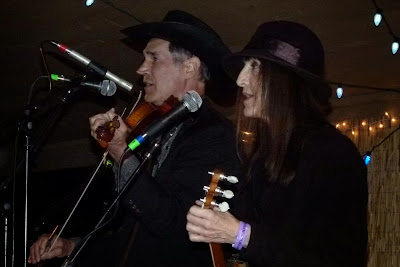 Hopping Jenny braved the cold to wrap up the night with another square dance. Since they came all the way from Portland to be a part of our festival, we thought it was only fair to introduce them to a little bit of Texas tradition with the Cotton-Eyed Joe dance! After their set, it was off to bed another round of late night jamming. 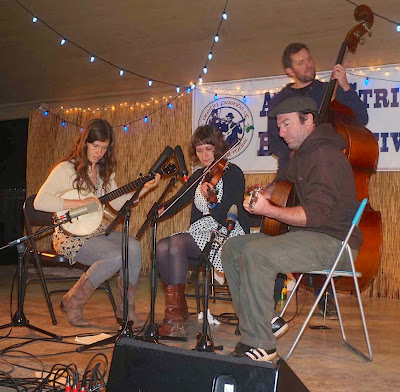 In spite of how tired we were the next morning, we all came together to close out the festival with a big gospel sing-along. As sad as it is to leave a great festival, it was time to pack up our instruments and fold up our tents until next year. But whether we drove away from Camp Ben with new tunes in our repertoire, new friends or great memories, we all left the festival with our lives a little richer than they were when we arrived. Thank you so much to everyone who was part of the 2013 Austin Stringband Festival and helped to make the weekend such a success! We can't wait to see you next year! 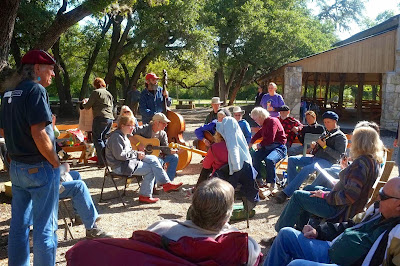 Posted by Austin Friends of Traditional Music at 2:29 PM 1 comment:

There's a new episode of the Four Potatoes Podcast about the biggest dance craze of the 1920s that you've never heard of. To hear the show and learn more, visit: You Say You Want a Revolution. Four Potatoes is a podcast about traditional American music and dance produced by Marc Airhart, a local contra dancer and caller. It's like Story Corps meets American Routes.
Posted by Austin Friends of Traditional Music at 8:44 PM No comments:

Beginning in July 2013, the Austin Friends of Traditional Music will be hosting an AFTM Showcase of fine traditional music from a variety of genres every FIRST Tuesday of the month at Flipnotics Coffeespace and Cafe, from 7 - 9 pm in the listening room.  1601 Barton Spring, Austin.

The first AFTM Showcase will be Tuesday, July 2, and will feature The Double Eagle String Band and the Ragtime Willie Show.

If you are interested in being considered to perform at one of these showcases, please contact  Christy Foster at aftmshowcase@aftm.us.


Posted by Austin Friends of Traditional Music at 9:14 AM No comments: